New Shorter Version of Mom Needs To Lie Down


Dr. Eleanor Stein and I have worked together to create a shorter version of Mom Needs to Lie Down: The years and lives slept away by ME/CFS.

The purpose of this video is to summarize the illness and its symptoms for a more general use.

Stay tuned for updates on where else you might be able to see this video soon.

View this video on YouTube here.
Posted by Taylor Cole at 11:59 AM 14 comments:

PRLog - May 9, 2015 - OTTAWA, Ontario -- National Buildings and Landmarks Will Turn Blue, Green & Purple on May 12 to Honour Three Invisible Disabilities: Local Residents are Invited to Join in this Unique International Competition.

The 2nd annual good-natured, world wide competition is going to colour the nightscape on May 12th, 2015.  Charitable organizations from each country are competing to see how many public buildings, monuments, and even private homes can be lit up and recorded by photos.  Anyone with a camera or a blue, purple, or green lightbulb can participate.

Ottawa, Ontario, May 9, 2015 —  The National ME/FM Action Network  http://www.mefmaction.com/ (http://www.mefmaction.com/) is proud to be spearheading Canada’s entry in the 2nd Annual International May 12th Light Up the Night Challenge event. This is designed to bring awareness to three disabilities which have devastated the lives of 1.4 million Canadians, yet remain invisible.

Niagara Falls, the CN Tower, Charlottetown City Hall, Ottawa’s City Hall Heritage Building, Calgary’s Langevin Bridge, Montreal Olympic Stadium, BC Place, Hamilton’s Farmer’s Market and Toronto City Hall are a few of Canada’s public contributions to this event, but anyone with a porch light or a window is encouraged to participate.

Light Up the Night is dedicated to three illnesses which go under the blanket category of Chronic Immunological and Neurological Diseases (CIND):

The illnesses have a profound impact on a person's ability to function. Many people end up housebound and some end up bedbound. The effects of people's lives and the lives of those around them are enormous. The effects on the economy are enormous as well. Imagine if every person in Manitoba was struck down by an illness that reduced their functional capacity. The province's GDP ($56 Billion in 2011) would plummet by billions of dollars.

ME/CFS/FM/MCS have a long history of misunderstanding and bureaucratic sleight of hand, but the scientific evidence is mounting. The latest research findings were presented at the 11th biennial IASCF/ME conference (http://www.mefmaction.com/index.php?option=com_content&am...), held in San Francisco in March 2014 and co-hosted by Stanford University.

You can contact the National ME/FM Action Network’s national office for more information.

Light Up the Night on May 12th, 2015, is a fun way to lend support and boost the morale of those with these diseases.  It is also a way to remind those in authority, that the invisibly disabled are there and still need the support which they have been promised.

Here is how everyone can participate:

The challenge is to get as many buildings as possible in your country to light up with one of the 3 colours used on May 12th - blue, purple or green *. There are public buildings/places like City Halls and Niagara Falls.  But individual homes are needed as well.

Bragging rights will be awarded to the country with the most photos in each of these categories:

All pictures must be emailed by May 31st to be included. When sending the photo, include information about where the photo was taken (i.e. town, region, country) The May 12th team will count and post the photos as they come in and post the final results as soon as possible after the 31st.

To enter, photos should be taken and sent to info@may12th.org.

This challenge is in honour of the 23rd anniversary of May 12th International Awareness Day. May 12th has been designated as International Awareness Day for Chronic Immunological and Neurological Diseases (CIND) since 1992. The diseases included in CIND include Myalgic Encephalomyelitis (ME), Chronic Fatigue Syndrome (CFS), Fibromyalgia (FM), and Multiple Chemical Sensitivity (MCS).

May 12th was chosen as it is the birthday of Florence Nightingale. She was believed to have suffered from ME.

*Blue is the official colour of ME & CFS; Purple for FM; Green for MCS

A new name for ME/CFS from the Institue of Medicine: SEID

A new report published on February 10th, 2015 by the Institute of Medicine (IOM) has established a new name for ME/CFS and recommendations for new criteria on how to diagnose it. The new name, systemic exertion intolerance disease or SEID, is currently being debated by the ME/CFS community.

For more on the report and what it means for Canadians, follow this link to a CBC article.

Below is the CBC's news graphic on the symptoms of SEID with the new criteria. 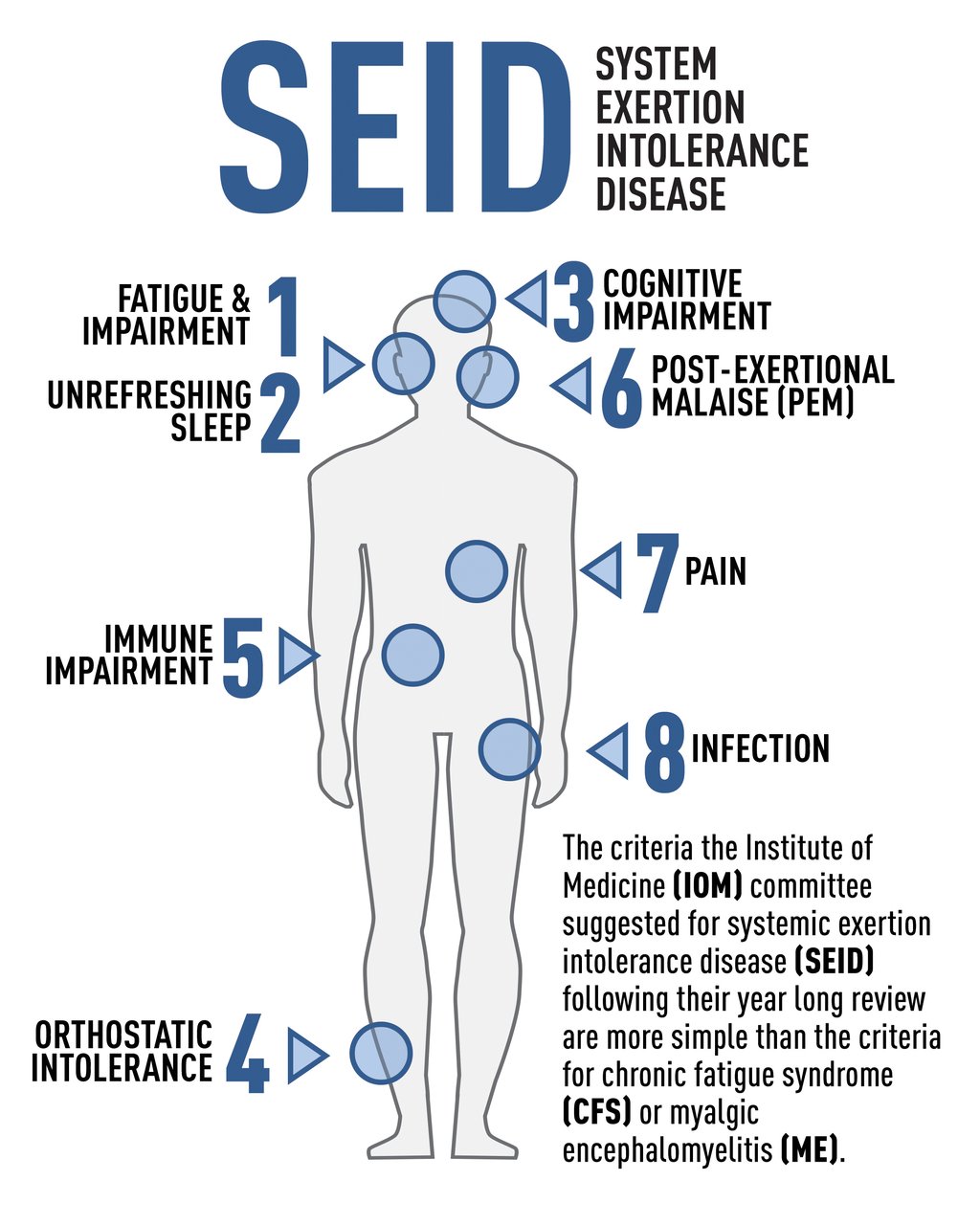 It seems that finally ME/CFS is getting more and more mainstream coverage. Below is a link to the Washington Post article by Julie Rehmeyer. It was published in the Health & Science section of the website on October 6. The author, Julie, was diagnosed with ME/CFS over eight years ago and still struggles with the lack of knowledge, support, and research that plagues this illness.

After reading this well-written, honest article, my eyes scanned to what is commonly the most disappointing part of an online posting (the comment section). The article eloquently points out some of the common misconceptions about the disease and why doctors and scientists have a hard time agreeing on a common definition, so it's easy to understand how the general public is especially mystified by this illness. However, the comments I read at the bottom were mind-blowing-ly ignorant. It's hard to believe that after reading Julie's article where she paraphrases an ME/CFS specialist who also works with HIV/AIDS patients as saying, "that if she had to choose between having HIV and having CFS, she’d unquestionably choose HIV."  There are approximately the same number of Americans (one million) living with HIV as there are Americans living with ME/CFS, yet HIV/AIDS gets three billion dollars for funding and research and ME/CFS only gets five million dollars. This disparity is due to lack of knowledge, specialists, and researchers in the field.


Please read this article for yourself and feel free to link to other well-written articles on the topic that you've come across.
Posted by Taylor Cole at 12:39 PM No comments:

As the months go by since the release of "Mom Needs To Lie Down: The years and lives slept away by ME/CFS" I've realized that many Winnipeggers with ME/CFS have virtually no resources to help them find a local support group. I've been contacted multiple times through this blog by people who are suffering from ME/CFS in Winnipeg and who feel alone.

Luckily, this blog allows me to help direct them toward the support group that is featured in the "Mom Needs To Lie Down" video. As Dr. Stein said in the video, support groups can be very helpful for people with ME/CFS so they don't feel as alone, scared, or unsure. Many people with this illness have had to seek out their own diagnosis and support groups are a great way to share that information. If you are in the Winnipeg area and need support please contact me through my email: momneedstoliedown@gmail.com.

I will connect you with the support group so you can be connected with the local ME/CFS community. The support group meetings are very flexible and relaxed and many of the women in the group correspond via email in between meetings. In the upcoming months I will be working on a new PSA type of video that will be played in medical clinics in Alberta. It will produced using footage from the "Mom Needs To Lie Down" video.

In the meantime, I plan to convert this blog into a landing page for Winnipeggers and Manitobans suffering from ME/CFS. If anyone would be interested in contributing their story to this blog, please contact me. Don't worry about format or if you are a good writer, I can help edit! The posts on this blog have already helped many local people with ME/CFS and more stories will help others who are just beginning their journey with ME/CFS.

Posted by Taylor Cole at 8:29 AM No comments:

We are working together to proclaim May 12th International Myalgic Encephalomyelitis/ Chronic Fatigue Syndrome, Fibromyalgia, and Multiple Chemical Sensitivity Awareness Day. The National ME/FM Action Network and May 12th International Awareness Day are encouraging people to light up a private or public building in their town or city blue, purple, and/or green. By lighting up buildings around the world we are standing together to raise awareness and fight stigma for ME/CFS, FM, and MCS.

Here is a quick video inviting you to Light Up the Night. Do your part. Light up your front porch, city hall, or town bridge blue, purple, and/or green for May 12th International ME/CFS, FM, and MCS Awareness Day.

Mom Needs To Lie Down: The years and lives slept away by ME/CFS

Posted by Taylor Cole at 9:00 AM No comments:

Mom Needs To Lie Down 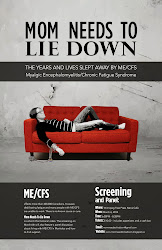